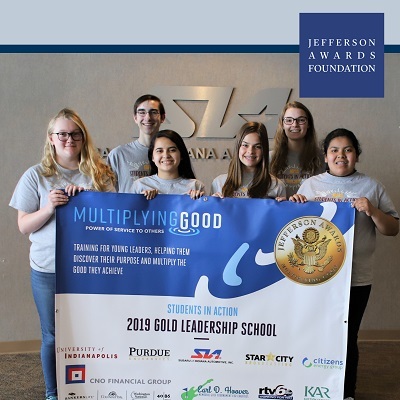 The Jefferson Awards Foundation Students in Action program empowers students to choose their own service projects and engage their schools to create an impact in the community. Teams from several area schools participated in the competition at Subaru of Indiana.

In addition, the foundation named Wainwright counselor Jason Learman as the 2018-2019 Advisor of the Year.

The team organized a canned food drive that generated more than 2,000 items for the YWCA's emergency shelter for women. The team also held a dance marathon to raised money for the Big Brothers Big Sisters Backpack Program.

"The food drive went to families that needed something extra during the holidays," explains McCutcheon junior Natalie Jefson.

Teammate Rebecca Ortiz says the project was personally rewarding because she enjoys helping women and children. "It also helped us see when we come together as a group, we can make a greater impact."

Junior Alex Brophy says thee were many challenges along the way in organizing a dance marathon. "Although we didn't raise as much money as we wanted, we were impressed with the generosity of individuals and businesses who donated toward the event," says Alex.

"It's inspiring to see young people who have a great passion to care for others including those in their school, but also in the community," says McCutcheon's sponsor Laila Wilson. "Students receiving the gold banner really shine light on what hard work can accomplish simply by helping and giving to others."